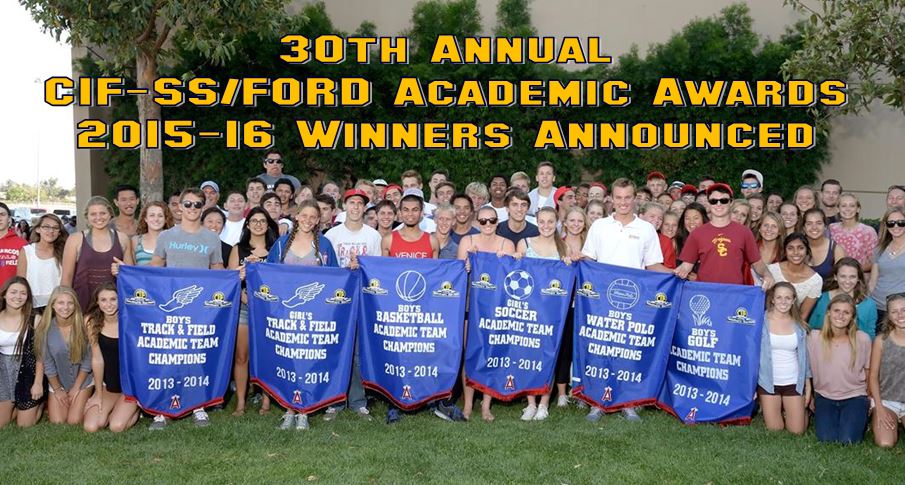 LOS ALAMITOS – The winners of the 30th Annual CIF Southern Section – FORD Academic Awards program were announced at the CIF-SS Office today. The team awards, based on a cumulative grade point average, are awarded in 23 team sports. Entries from 1,852 teams were received this year. Twenty-six different CIF-SS member schools are represented amongst the team winners. Palos Verdes High School led the way with 7 different team winners topping the academic lists. The annual academic awards program is sponsored by the Southern California FORD Dealers with assistance from the Los Angeles Angels of Anaheim.

To be considered, teams must have a minimum 3.0 GPA average (4.0 scale) in the first semester of 2015-16 school year. The highest team GPA in each sport category by enrollment determines the winner. Schools are divided into two enrollment categories, 1500 and above and 1499 and below. The team with the highest GPA in each enrollment category for each sport receives the award. The first place teams receive a banner to commemorate their achievement. All teams who participated and qualified receive Academic Award certificates for their student-athletes.

Additionally, 248 student-athletes have each been named the individual “Student-Athlete of the Year” by their school. Each CIF-SS member school is entitled to name a male and a female “Student-Athlete of the Year” that must be a senior having maintained a minimum of a 3.5 GPA (4.0 scale) over the past three years, in addition to earning a letter in at least one varsity sport and participating in extracurricular activities (music, drama, service groups, etc.).

The academic team winners and golf grant recipients will be honored in a pre-game ceremony before the April 26 Angels game versus the Kansas City Royals. Complete list of award winners follows.